Policing is a Partnership 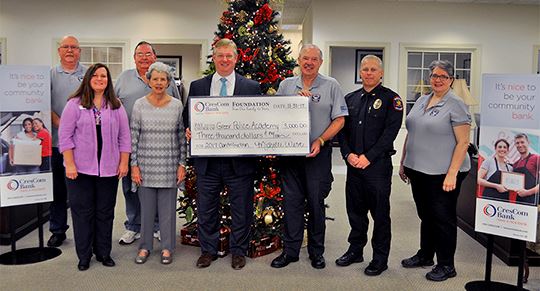 CresCom employees and the bank contribute foundation funds in order to give back to worthy programs in the community.

“The Citizens Police Academy Alumni Association is an important part of the community and that’s one of the focuses that we have with the foundation,” said April Staggs, CresCom’s Vice President of Commercial Lending. “These particular funds will go toward the summer youth program, which is very important. If we instill good values and show our youth how to be a part of the community that will in turn create productive citizens of the future who will be living and working in our community.”

The grant will help fund overall expenses for the program, which introduces middle school students to police operations, team building and leadership skills. Separate two-week camps are offered for males and females each summer.

“Last year there were a couple of mix-ups at the last minute with sponsored lunches that we went ahead and paid for. The budget was also short for uniforms and the promotional brochure. So this grant will help general expenses,” GPCAAA president Dale Haule said.

“CresCom has been a great addition to the Greer Community and we value their partnership with the Greer Police Department and the Youth Police Academy. Without them it would be more difficult for us to continue the Youth Academy. We’re very grateful and look forward to a long relationship with the bank. The staff exemplifies the people of Greer. They’re friendly, giving and don’t expect anything in return. A simple thanks doesn’t seem like really enough.”

“The Citizens Police Academy Alumni Association is a very significant partner for the Greer Police Department. They’re like a small army that assists us in carrying out many of our community functions and communicate to the public what we do as a department and why we do things a certain way,” Greer Police Chief Matt Hamby said. “We’ve had hundreds of citizens go through the Citizens Police Academy and they are invited to become active in the Alumni Association. We’re very grateful for their work.”